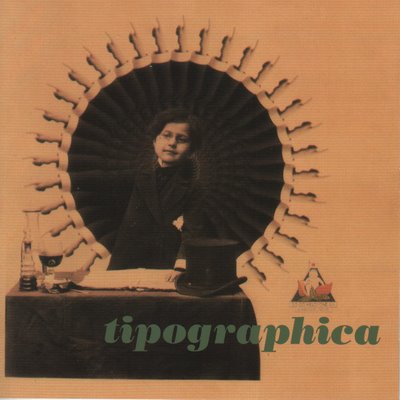 The Japanese progressive rock scene in the 90s in general has taken a remarkable turn towards a more innovative and unique styling. In the latter half of the 80s, the Japanese focus was on the more melodic symphonic end of the genre such as Teru's Symphonia, Outer Limits, Pageant, and Mr. Sirius. The 90s already seem to have a different focus, especially after the Lost Years in the Labyrinth CD, and the newer bands are leaning towards a more unusual RIO, experimental or even Zeuhl influenced music. Tipographica is one of these new Japanese bands, roughly related to contemporaries such as Il Berlione, Zypressen, Happy Family, and to a much lesser extent the earlier work of Katra Turana or Lacrymosa. This, their debut album, easily shows that the Japanese seem to be shedding their reputation as mere copyists and are developing a serious attitude of brazen defiance of the norm. Needless to say, this debut is vastly impressive and despite what is turning out to be a great year for progressive, I would say that this may be my pick of the year to date. Tipographica are definitely in the RIO vein with noticeable shades of early Henry Cow and Hatfield & The North (and a nod to the chamber rock groups such as Julverne, Univers Zero, or Six Cylindres En V.) As a sextet, they show a remarkable pallet of instrumentation: drums (with a Zappa-esque sense for dazzling tuned percussion); bass; keys (from modern synths to really chunky organ); guitar (clean to fuzz with a distinct Phil Miller influence); alto sax and trombone. All of the musicians are nimble, adept, and have extremely proficient control over their instruments. The music is ridiculously complex, to the unconventional point, that mere surface listening will not reveal its incredible subtlety. The music has a playfulness and sense of humor similar to the joviality of Samla at times and the pseudo transcendent sarcasm of Gong at others. Sometimes you just can't help but laugh, especially bearing their titles in mind — "Prostitute Robot by Soni." It jumps from theme to theme with abandon, wry and sassy, often sounding like a mad carnival. For those wanting some type of theme development, I think this may be a bit too erratic and bizarre. To me, this is challenging and rewarding release, funny and brash and superb. The Japanese seem to be quickly becoming the heirs of truly original new music.

Hello... I'd like to report a Frank Zappa sighting — actually not a visual sighting, but after hearing the first few minutes of this debut disc by Japan's Tipographica, I'm convinced that Zappa's spirit is alive and well across the Pacific. Tipographica is an all instrumental six-piece of guitar, bass, drums, keyboards, saxes and trombone, playing an intensely complex and humorous music that blends the best aspects of Uncle Meat/Hot Rats period Zappa, some vintage Henry Cow, Picchio dal Pozzo, and other folks along the RIO axis, along with their own very unique musical perspective. Being the proud owner of a live tape by these guys recorded in October '91 — an outstanding set of Canterbury influenced fusion — I thought I was fully prepped for this CD release. Surprise! It turns out this is some of the tightest, quirkiest, interesting and complex music I've ever heard. And did I say humorous? Well, I'll say it again! Their music is a constantly changing chain of events, with little if any repetition. Can't tap your feet to it, at least not for long, because the meter seems to change with every other measure. The playing is impeccable, every instrument works together like a fine-tuned machine, and no one instrument in particular stands out in the lineup — it's clear they're all working too hard to have time to show off. Bits of rock, jazz, avant-fusion, blues and neo-classical are combined in varying degrees in each composition, often multi-layered, so that at any given moment there may be numerous things going on, all interconnected. This may be difficult music at first, it takes many plays to get to know it well — in fact after the first listen one may have nothing memorable to take away, other than the knowledge that something incredible has just come out of the speakers. Soon it begins to reveal itself, using the humorous aspects of the writing as the hook that brings the listener back for more. After five or six listens, you can't stop. Yet even after twenty or thirty spins, I'm still hearing new things I haven't heard before. Amazing stuff.

While Japan has always had its share of inventive new musics, the recent surge in this area has put the country on the map like never before. With Happy Family, Il Berlione, Ruins, Zypressen, Afflatus, Lacrymosa, and now Tipographica, Japan is a lively hot-spot that seems to be open to experimentation and genre-stretching. A combination of Henry Cow, Zappa, composed jazz, and modern classical, Tipographica's debut is one of the most complex and engaging works of recent years. A six piece consisting of guitar, bass, drums, keys, sax and trumpet, each instrument shares the limelight and pulls its own weight. Dense yet whimsical, Tipographica leads the listener though eight tracks of labyrinthine counterpoint and polyphony. With so much emphasis on changing rhythms and time signatures, when the band does repeat the same structure for more than a few bars, it stands out. However, this minor detriment does not reduce the album's overall appeal. With such a prominent brass section, Tipographica may sound superficially jazz-like, but the feel and structure is tight to the point of being rigid. Jazz fans may enjoy this album, but my guess would be that lovers of dense, complex composed works would eat this up. This debut comes with my highest recommendation, as it is one of my favorites so far this year.

Marcœur - m,a,r, et cœur comme cœur – One might suspect from the unusual title that this is not your usual fare. Indeed, Albert Marcœur is not your run-of-the-mill progressive rock musician, and while this writer can’t claim...  (1999) » Read more

Witchwood Gives Us a Taste of Winter