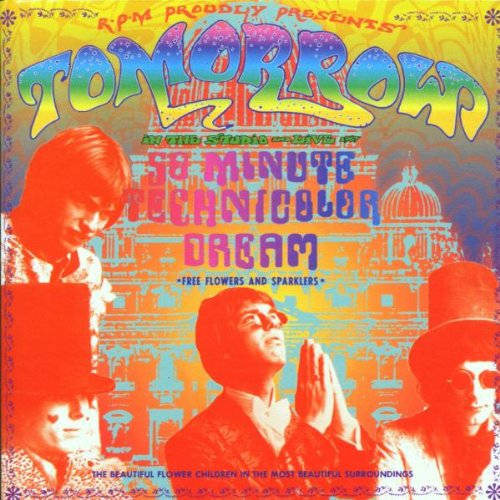 Tomorrow is currently a hot psychedelic commodity on the market: many of the band's English UK singles fetch top dollar on the English collector's circuit. Adding to the frenzy is former guitarist, Steve Howe who found an old live tape from the band's famous New Year's Eve 1967 performance. The group was included in a live set sandwiched in between Pink Floyd, Soft Machine, and the Jimi Hendrix Experience. It's still hard to believe that Howe's roots were as a rocker with the fashionable underground. Here's a raw account, forty-five minutes of what the band was like live. You don't necessarily need the drug induced aspects of the scene to appreciate what they were trying to do on stage. The best performances are on the band's hit, "My White Bicycle," and the two unreleased tracks which prominently feature Howe's leads despite the poor sound quality. The studio portion of this disc includes outtakes from the band's unused film songs and unissued outtakes from the band's only album. In contrast to other groups of the scene, Tomorrow was more like the Yardbirds than anyone else. The comparison continues onto the band's exit from Fellini's Blow-up movie soundtrack (where the producer chose the Yardbirds instead). The RPM label is building a reputation as a leader in liner notes productions work as well. A miniaturized four-color page layout (front and back) of band interviews, singles reviews, and old copies of handbills is included too. The disc is as close as you can get now to a scene long dead and buried in the minds of the archivists.