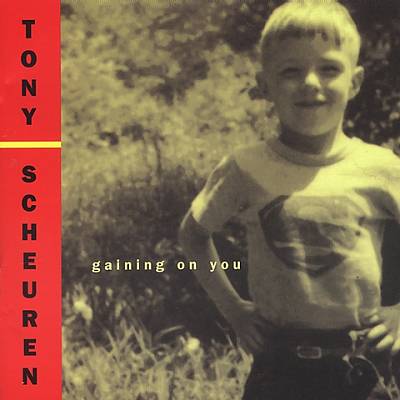 Scheuren began his recording career back in the late 60s with the band Chamaeleon Church, and was later, along with Ted Myers, one of the principal songwriters in the final edition of Boston based band Ultimate Spinach. In the 70s he was, along with John Belushi and ex-bandmate Chevy Chase, a member of National Lampoon’s off Broadway cast of Lemmings; during this time he produced numerous musical parodies, the best known of which are his Neil Young parody “Southern California Brings Me Down,” and his James Taylor parody “Methadone Maintenance Man.” After this fruitful period, Scheuren’s musical career hit the skids, and while he turned to other forms of work for survival, he continued to write, arrange and record songs in his home studio until his untimely death in 1993, leaving hundreds of reel tapes of never released material. Gaining on You is the first installment of this material, released by his family. Scheuren plays all the instruments and sings all the harmonies, in a gentle and heartfelt melodic style reminiscent of many 70s singer/songwriters, seemingly frozen in time; some reference points might be Michael McDonald or James Taylor. Many of the twelve tunes here could have been successful hits in the 70s scene that spawned the careers of Jim Croce, Jackson Browne, Carole King, or Carly Simon.

Tomorrow - 50 Minute Technicolour Dream – Tomorrow is currently a hot psychedelic commodity on the market: many of the band's English UK singles fetch top dollar on the English collector's circuit. Adding to the frenzy is former...  (2000) » Read more

There Is Actually Video of Xixxo