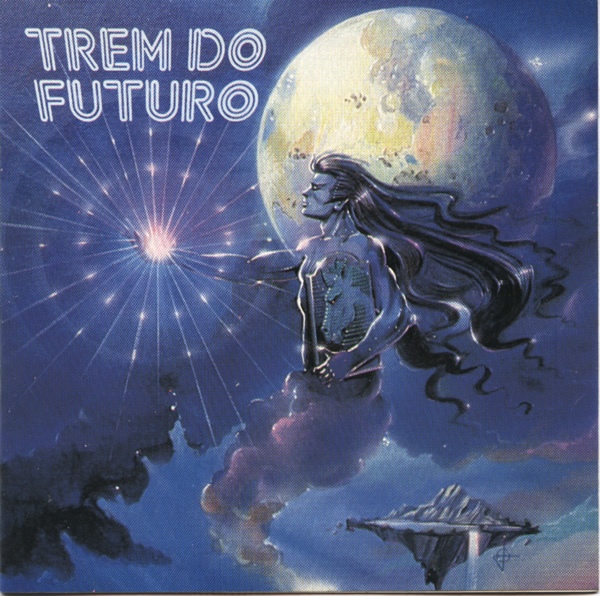 Trem do Futuro ("Future Train") is a young six-piece from Brazil that shows a lot of promise on this, their debut album. A standard four-piece of guitar / keyboards / bass / drums is rounded out with a dedicated lead vocalist and a flautist. Their style is rooted in classic progressive, with a touch of neo (can it be avoided?) and a big helping of folk influences woven right into the fabric of their music – much like the late, great 14Bis. The sound relies heavily on symphonics and grand visions for dynamics, with the folk underpinnings providing the color, and a fat bottom end that sometimes tends to get lost in the mix. Their sense of composition and arrangement is quite impressive; most of the tunes, while not overly long, are nonetheless quite involved and move through many ideas. Vocalist Paulo Rossglow sings the Portuguese lyrics with emotional savvy and power, though his voice always seems a bit too low in the mix. In fact, the underpowered and sloppy sound engineering is my only real gripe about this album – the opening track could be an example of how to do everything wrong at the mixing board. Still, this is a very solid debut from a band with a bright future, and certainly one to watch for in the future.

If I'd had the chance to hear it last year, this would have been among my top 10 of '95. The six men that make up Trem do Futuro have a wonderous gift for melody and arrangement that any Italian band of the 70s would be proud of. They do have a touch of Latin flair to give them distinction, and singer Paulo Rossglow is one of the nicer (if not especially impressive) vocalists to come around in a while. The angelic flute playing, coupled with the tendency for the keyboardist to use electric piano-like sounds, give this album a slight retro feel. An excellent debut.

Admiral Ted Brinkley (semi-ret.) - Directs the Verrugoso Vista Junior Junior College Grads of ‘77 – Here’s something that came right in out of left field; the artist, title, liner notes and everything else about this disc appear to be some kind of prank – except for the music, that is....  (2006) » Read more

Imán, Califato Independiente - Camino del Águila – Here's another gem in the hidden treasure trove of Spanish progressive rock, an area I'm unabashedly a big fan of. Musea did well to release this, as it should appeal to just about anyone who has...  (1994) » Read more

Neil Haverstick - Other Worlds – Back in #18, I reviewed Neil’s last album, Acoustic Stick, a masterful jazz / blues / folk acoustic release utilizing customized guitars and basses with 19 or 34 frets to the octave (rather than the...  (2000) » Read more

Blackberries Want to "Light a Fire"