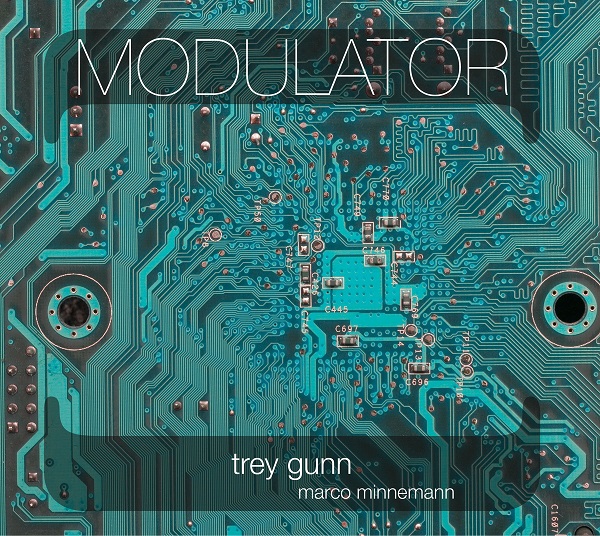 From the outset this recording sounds like a modern update of Eddie Jobson’s UK on steroids, with a scoop of 21st century Crimson on top. It was arrived at in a fascinating way. Master percussionist Marco Minnemann improvised at his drum kit for 51 minutes and sent the results to several musicians, including Trey Gunn, Mike Keneally, and Alex Machacek. With Modulator, Gunn has come up with some fascinating grooves to sync with Marco’s precision moves, all in step and engaging. This is not quite like Tuner, TU, or KTU, because Minnemann’s method differs from Mastelotto and Bozzio with his unique big-kit sound. The drumming on “Spray 1” sounds like Bruford at the kit. The pieces roll along until a unique audio roadblock is encountered in “Spectra,” in the form of traditional Irish instrumentation. After that, Gunn solos with an ominous interlude that leads into a wistful snare and cymbal interplay. The sour violin and bass clarinet samples race down into a corner that suddenly isn’t so blind after all. “Mono-Punkte” has Jaco Pastorius’ distortion-laden sound under and around a thrakking rhythm. “Coupling” goes into tricky ostinatos in off-timing and ends up with twinkling hammer dulcimers and pianos. Plus there’s a prominent Asian motif going throughout much of this music. Despite being recorded on separate continents at different times, it sounds like two fellows playing together in the same room. There is no discernible disconnection. It has all the improvisational angst of the Larks' Tongues rhythm section. This is a superb next step for Trey and his faithful listeners.

Salvation - 1st & Gypsy Carnival Caravan – Among the mainstays of the West coast psychedelic scene in the mid- to late-60s was a jamming unit with a slight country flavor originally called The New Salvation Army Banned. Eventually a certain...  (2010) » Read more