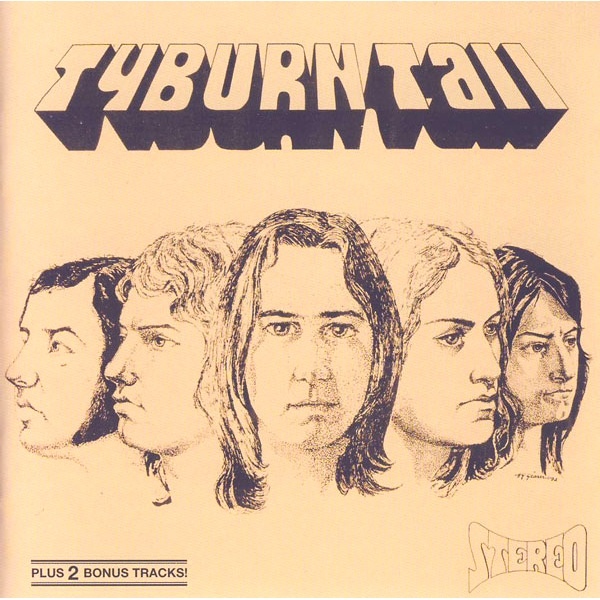 From Speyer, Germany, Tyburn Tall were together from 1969 to 1975. During that time they became a well-respected live band, acting as opening act for name European groups such as Golden Earring, Space Odetty (who became Frumpy), Renaissance, Amon Düül II, Taste, East of Eden, Hardin & York, Kin Ping Meh, and Nine Days Wonder. Obviously, some Germans have strong memories of them, which is part of the reason why the band's only LP is so sought-after. Also, that one album was issued privately by the band in only 1000 copies, 500 of which were destroyed in a fire. As such, it has not only become rare and expensive, but also legendary. At the time of making this album, Tyburn Tall were a quintet of keyboards (mostly organ, or perhaps I mean ORGAN!!!), guitar, bass, drums, and vocals. Organist Reinhard Magin, who apparently had just joined at the time of this release, gives the album most of its personality. He uses the deep, growling, hot-wired-preamp sound favored by the Hammond organists of the day, in Germany particularly. He is also quite an impressive player, as displayed on the solo rendition of Bach's famous "Tocatta and Fugue in D-Minor" at the beginning of "War Game" and over the fast, complex rhythmic changes of "I Am America Too" (with lyrics based on the Lagnston Hughes poem). Unfortunately, there are too many pedestrian hard-rock passages in which he's not given much more to do than comp very loudly in foursquare style. Then there's vocalist Klaus Fresenius, whose vocal range I would be very impressed with if he weren't so damned annoying. His voice can go from dramatic deep vibrato-laden low-range tenor to high-pitched screaming maniac faster than you can say Axl Rose. Nowhere is this more evident than on the ten-minute "In the Heart of the Cities (Broken People)," the better part of which features Fresenius screeching away like a bird of prey. He almost makes "War Game" and "I Am America Too" unlistenable, fortunately the strong music stands up. He behaves himself for all 17 minutes of "Strange Days Hiding," which (while there aren't a lot of cool meter shifts like in "I Am America Too") is probably the album's high point. The master tapes of this album were lost, so this had to be recorded on DAT from mint vinyl, then transferred to tape using Cedar's "No Noise." Some quiet passages on the long organ intro reveal some awfully loud hiss, otherwise the sound is superb. Two live bonus tracks, both covers of Colosseum songs, have less than stellar sound, but are strong performances anyway.