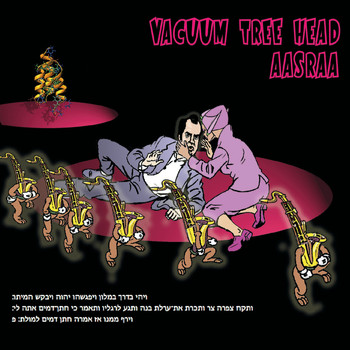 Aasraa is by far the more mysterious of the two recent Vacuum Tree Head EP releases, though I wouldn’t say it’s any better or worse than its partner release Botafogos in Shadow Position, it’s just different. With one less song and seemingly shorter (I think it just seems that way), it may perhaps be more rooted in improvisational origins. As always, the artwork on the jacket and the booklet inside is outstanding, again by founding member Jason Berry. Is that former president Richard Nixon on the front, listening to some kind of she-demon, while a parade of marching saxophones goes by? And what’s that strange thing up on the second level? There are three lines of Hebrew (I think) inscription at the bottom that are also a mystery. It gets even better in the booklet: same guy “Russell, please fix me a cup of tea.” And turtles, all the way? But the booklet serves as a guide to who plays what on each of the five cuts, and soon you realize (if you also have Botafogos) that while Aasraa features the two principals Jason Berry (saxes, bass clarinet, synths, keyboards, electronics, Mellotron, metal percussion, and more) and Micheal De La Cuesta (vibraphone, electric piano, synthesizer, electronics, orchestral chimes), the other featured musicians, which include Andy Nonymous (piano), Christoper Meeder (tuba), Tim Byrnes (trumpet, synth), Ross Bonadonna (bass clarinet), John Kenneth Press, Keith Abrams and Thomas Scandura (drum kits and percussion – yes, at least one track here features all three at the drum kit) and many others are mostly a very different set of musicians than play on Botafogos. No double-reeds on this one at all, but the featured vocalist on two tracks is Lucy Foley (wordless on “Moses and Monotheism,” and featuring lyrics on the closer “Pillar Mirage”), otherwise this is all instrumental. This is more of an East Coast version of Vacuum Tree Head (Jason Berry called Brooklyn home for many years, but has now returned to the Bay Area), given that Byrnes and Abrams are members of Kayo Dot, and Scandura is a member of The Molecules, all excellent NY based groups, and the players on the partner EP are mostly from the San Francisco Bay Area (where De La Cuesta has called home all along). Opener “Veil of Tamar” is mostly A. Nonymous doing an avant garde jazzy piece on the piano while others add to the fun with electronics, drums, synths, and chimes. Another piece of note is “Adonai” where the group is improvising over a tango rhythm and knocking it out of the park. Yes, everything here is a mystery, but repeated plays will at least bring forth familiarity! Lastly, the clear differences between the two EPs are the reason why they were not reviewed together.

Electrum - Frames of Mind – Here are three guys who love Rush and decided to record an album together of songs influenced by the Canadian trio. It's a scenario I've seen played out over and over (see Afterlife in these...  (1999) » Read more