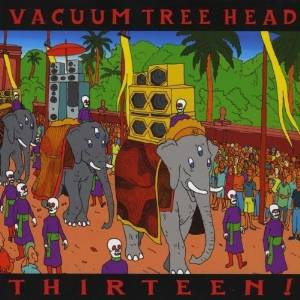 Once one of the most prolific outfits around (when the band was based in San Jose, California, they put out no less than 10 CDs between ’93 and ’99), their output has slowed down considerably in recent years – possibly because the members are now separated geographically across the country – but the quality is as good as ever. The album at hand evolved over a period of seven years, and it may well be their best effort to date. Mainstays Jason Berry (keyboards, woodwinds, electronics, etc.) and Michael De Le Cuesta (mostly guitars) along with guitarist Charles Llloyd and drummer Justin Markovitz are joined by a large cast of additional players and vocalists, track depending, for this interesting and compelling brew of diverse and highly energized avant-garde rock, with lyrics split between English, Spanish, and Filipino. The compositions are tightly arranged, condensed into a short song format, seemingly informed by punk, RIO, psychedelic rock, world-pop, and just about anything else one can think of. Few of the fifteen cuts last longer than two minutes (with several under one minute), but almost any of them can get stuck in your mind for days after hearing them even once! Singers Sylvia Gordon and Lucy Foley appear (separately) on many of the cuts herein, and their vocal presence adds a touch that might occasionally remind the listener of Thinking Plague – well, just a little; Vacuum Tree Head really has their own thing going, and this latest release is definitely worthy of your attention.

Cyrille Verdeaux - Messenger of the Son – Verdeaux' name should be familiar to many, he was the main mover in the intensely symphonic seventies French band Clearlight, whose first two albums Symphony and Forever Blowing Bubbles are essential...  (1996) » Read more