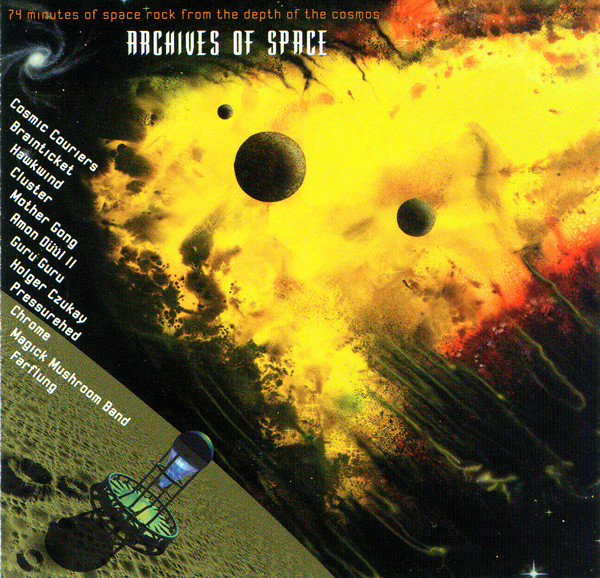 A healthy variety of spaced-out entries makes the grade for inclusion on this intriguing package. Take the same basic style as Hawkwind (captured here by a lengthy one-chord wonder), but add two more chords and update the recording quality and you have Pressurehead. I can just barely distinguish Guru Guru's "LSD March" from an amateur garage band, but give them the benefit of the doubt hoping that their studio recordings live up to their reputation. Credit Chrome with the most bizarre contribution though. The punkoid Neu!-cum-Captain-Beefheart-goes-heavy-metal slice of grungey pie isn't what you'd picture as space rock, and didn't have to be. For most creative and satisfying, the two pieces by Cluster and Cosmic Couriers (a.k.a. - Moebius / Neumeier / Engler) respectively take all the marbles. The primeval meets the modern in the Couriers' electro tribal jam, exploring a style as unprecedented as it is fruitful. Neumeier deserves a standing ovation for night-and-day levels of improvement since his Guru days. Cluster's is a warbled and richly scored mini-masterpiece that does everything the right way, outshining their recent Japan Live material. But don't forget Holger Czukay, whose "Float Space" is likely to go unnoticed despite being more appropriately idiomatic than anything else here. Amon Düül II salutes the latent hippy in you while Mother Gong's gentle caress is its updated manifestation in the 80s new age market. The set is finished off by a pair of neo-space prog numbers by Farflung and Magick Mushroom Band. Eloy meets Floyd on the former, boasting a remarkable sense of textural nuances for this style (something that was marred by the lyrics and abrupt style change of Brainticket's entry). The Mushroom men capture in a couple of loosely jazzy minutes what takes Ozric Tentacles decades. Real drummer and everything!