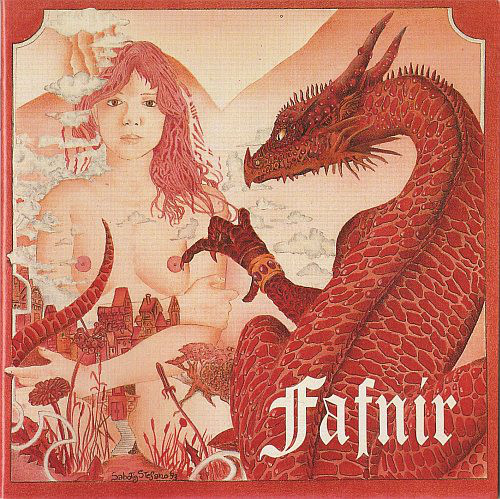 Fafnir is an Italian compilation of new talent roughly orbiting the symphonic progressive axis, and as with many other compilations, it's a mixed bag, encompassing neo-drivel to mind blowing invention. Fancyfluid's "Nuove Effemerdi" is quite a step up from what was one of the most embarassing neo-progressive outfits. Thankfully instrumental, it fits nicely into the Marillion / Edhels / Boffo vein with a high spirit and catchy melody — not my cup of tea, but somewhat decent. Consorzio Acqua Potabile's "Cavaliere Mascherato" is barely distinguishable from any other soft-rock ballad on the planet — Air Supply in Italian? A neo-prog OMD or Depeche Mode with symphonic arrangements and operatic back up vocals? You tell me! Guitarist Marcello Capra's "Combat" is a multi tracked guitar affair with a one-dimensionality that guitar-only tracks seem to invoke (Göttsching's stuff is an exception). Nice but not riveting.

Deus Ex Machina's "Luna" is the compliation's classic, a brilliant undescribable and inventive track with violin, keys, and guitars galore, again showing that a true progressive group never rests on its laurels. Is this the direction they're going? I hope so! Clarion's "Bakazan" is a ridiculously bouncy track, as simple as a nursery rhyme and so silly sounding it's hard to take seriously. Still this type of embarassingly infectious joy is a rarity in the droll world of neo-prog. Whatever. New Credo is another new symphonic band, their "Prologo" is similar in style to the Fancyfluid track yet more inventive and involved, again not incredible but certainly promising with a very IQ-like finale. Michele Tale Di Bella's "Across Takla Makan" is another piece like Capra's, a multi-tracked guitar composition of pleasant mediocrity.

H2O's "Happiness" is typical neo-prog somewhat in the Marillion vein with hints of 80s Mike Oldfield, again nice but fairly predictable with decent vocals. Myros' "Gogoth" is yet again another of the multitudes of average symphonic bands, a thematic piece of little exceptionality. One of the few established bands, Polish neo Collage's "Midnight Flyer" is quite plagiaristic, the verses are much too similar to Marillion's "Warm Wet Circles" — their Basnie album is a far better representation of their talents. Ars Antiqua is similar in many ways to compilation mates New Credo or H2O with a good melodic sensibility and some nice flute. Max Oil's "Slayer Lady Night" is a terrible choice to end the compilation — a neo prog / pop track with terrible vocals and a dreadfully cheesy chorus with disco like synth-horns. Yuck.

Antiklimax - Plus loin vers l'est – Antiklimax is the name given to the keyboard endeavors of Frenchman Vincent Benesy. This CD is the result of five years' work focusing on many Euro film based ideas as impetus to funky compositions...  (2008) » Read more