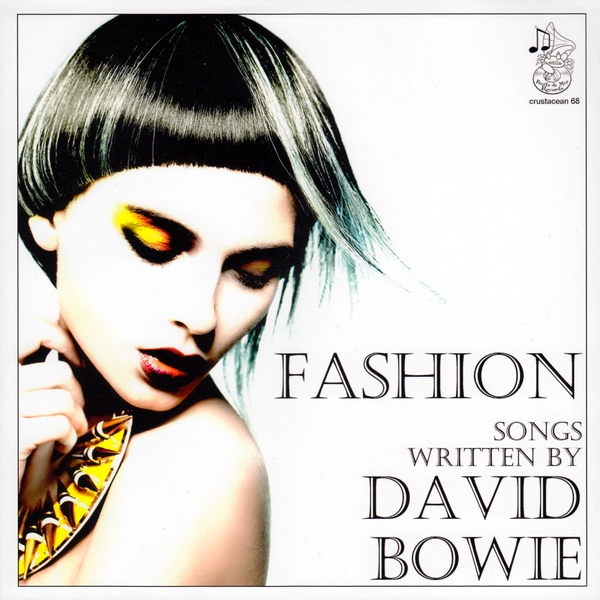 This year’s Fruits de Mer Club’s member freebie is a set of David Bowie cover songs. Conceived and recorded months prior to Bowie’s untimely death this past January, Fashion showcases long-time FdM artists and as usual a number of new names. In addition, this collection spans obscure B-sides as well as more well-known Bowie tunes. The 15 songs are arranged in almost a chronological order, except for the final two songs that jump back in time. The disc opens with The Past Tense’s pop-psych / blues-rock cover of a 1966 B-side, “Good Morning Girl.” This version is heavy on organ, but doesn’t really excite me. The second track is by The Nomen (a new FdM band) and is another B-side, “The Gospel According to Tony Day” from 1967. The third song is covered by the Sidewalk Society, a band that should be familiar to FdM fans. They take on Bowie’s first single (1965) after he changed his name, “Can’t Help Thinking About Me.” Now the music is stepping up a notch and this cover is pure 60s psych. The next song is by Ilona V, an early FdM artist, but not one we have heard from in quite some time. She created a quiet, dreary, and a bit jazzy cover of the 1970 song “Tired of My Life.” Analog synthesizer maker and prog-psych composer Cary Grace’s cover of “Black Country Rock” from The Man Who Sold the World follows, two minutes longer than the original and featuring extended jamming of guitars and analog synths. Track six is 1971’s “Andy Warhol” from Hunky Dory by Mooch. Mooch is Steve Palmer on all instruments and Crystal Jacqueline on vocals. This version is an eerie interpretation with a ton of reverb, electronics, and acoustic guitar that transform Bowie’s art tune into another Crystal Jacqueline goth-psych masterpiece. Drawing another tune from Hunky Dory, psychmeister Mordecai Smyth gives a Syd Barrett treatment to “Kooks” and extends it by about one minute. Next is one of my favorite songs from Hunky Dory, “Life on Mars,” covered by a new band, Sheepshanks. This version is fantastic and is a great tribute to both the song and the original artist. Next in line is Jack Ellister with a tune from 1973’s Aladdin Sane, “Drive-In Saturday.” This song is one of Bowie’s sci-fi tunes and Ellister imparts an additional dark edge to the music. Next, the oddball ZX+ presents first instrumental piece on the disc, “Breaking Glass” from 1977’s Low. ZX+ uses a ton of distorted / fuzzed guitar and other lo-fi tricks to impart a psych / new wave feel to the song. Then we get Bob Gould’s outstanding cover of “Sense of Doubt” from Bowie’s venture into Krautrock, 1977’s Heroes. Gould’s cover is nearly indistinguishable from the original. Track 12 features The Seventh Ring of Saturn’s cover of “African Night Flight” from 1979’s Lodger. This cover is a mellow pop interpretation of Bowie’s original and therefore loses some of the song’s edge. However, the Mellotron that appears about midway provides an exotic element to the song. Now we move into the 80s with the Blue Giant Zeta Puppies’ take on “Fashion” from Scary Monsters. The band morphs this song into Joy Division territory, which is an interesting take. For track 14 we jump back to Low for Consterdine’s cover of “Sound and Vision,” which is a music-box instrumental interpretation of Bowie’s song. There are mechanical sounds and at the end of the song, the music box unwinds, slows way down, and fades out. The disc closes with Sendelica’s live rendition of “Ziggy Stardust,” recorded in August 2015. They will be releasing a studio version of “Ziggy Stardust” in April on FdM as well. If this fantastic live version is any indication, the April release should be outstanding. In summary, as with most tribute compilations, there are peaks and valleys on Fashion. But if you were lucky enough to receive a copy as an FdM club member, or you find an affordable copy on eBay, you will not be dissappointed.