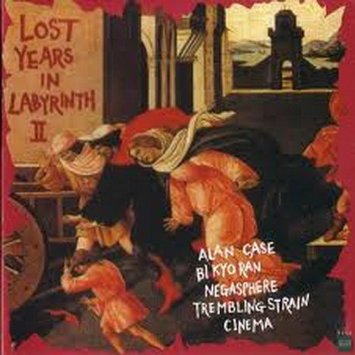 Unlike volume one, there is no theme governing this one other than the fact that all the groups record for Belle Antique. They have intended it as a sort of beginner's guide. All the songs are unique to this release, which includes : Bi Kyo Ran, Negasphere, Alan Case, Trembling Strain, and Cinema. Since Lost Years In Labyrinth II was reviewed in Exposé #7 I'll try not to be redundant. Some may wonder about the inclusion of Dutch songwriter Alan Case. This kind of lyrical, elaborate "pomp-rock" is very big in Japan; as witness the recent interest raised over two of Case's fellow countrymen: Valensia and Robby Valentine. No doubt he is influenced by them. Cinema's piece succeeds in really capturing a unique gothic spirit. Short and to-the-point, with beautiful instrumentation (I love the combination of violin and bazouki), it's more evocative than most of the material on their full album. Bi Kyo Ran is represented by an alternate live take on the epic-length "Double," from their debut. Negasphere's Genesis / Hackett-inspired instrumental seems lacking in vitality given the glut of neo-prog born since the time they were active. Trembling Strain's contribution is another idiosyncratic blend, like their own album. Here they use jew's harp, dumbek, and biwa – all very sparingly. The result is a stark, barren musical landscape that, like a Japanese painting, suggests as much by what it leaves out as by what it includes.

Most people look for one of two things in a compilation : an introduction to new groups; or a collection of music in a single genre. Volume 2 instead adopts the something-for-everybody approach. Think of it as an introduction to Belle Antique.

Remember Lost Years in Labyrinth? It featured material by four Japanese Canterbury-ish/Chamber Rock bands — Lacrymosa, Il Berlione, Zypressen, and Soft Weed Factor. OK, now forget it. There is almost no similarity between the original and Lost Years II; in fact with this new collection there seems to be no unifying thread at all, except that all the artists are Japanese — no! Wait a minute, that's not even correct, the first two tracks on Lost Years II are by Dutch multi-instrumentalist/composer Alan Case, English lyrics and all. Case opens with his eleven minute project opus "Fast Asleep," playing all keyboards, acoustic and electric guitars, lead and backing vocals, and drum machine programming. Other musicians provide additional guitars and harp, as well as a two part female chorus. The long instrumental parts of this are quite interesting (spoiled somewhat by drum machine, though), but the vocal parts are typical rock stuff, reminding me of Canadian Larry Gowan. Case's second track "Dark Nights" is your basic four-minute pop track, a good song, but one that doesn't really belong here at all. A live take of "Double" from Bi Kyo Ran's first album is next up — this is the legendary Japanese band that sounded more like King Crimson than Crimson themselves. The recording quality ain't great, but it's as good as anything on their Who-Ma or Fairy Tale albums. Negasphere's nine-minute instrumental begins with a beautiful piano solo and then moves right into a powerful progressive rock riff with biting guitar lead. Trembling Strain's "Music for Aerial Sepulture" is basically Pneuma with two vocalists, using jews-harp, traditional Japanese instruments (biwa?) and percussion. Cinema's "Take" also features an odd lineup of instruments, including bouzouki, violin, ocarina, and female voice, perhaps reminding of Lacrymosa's contribution on Lost Years 1. There you have it — six tracks, a little shy of an hour. Although parts of the Case stuff is a tad mainstream, and the Bi Kyo Ran is a little tiring, the album gets much better as it goes along. Your mileage may vary.

Agitation Free - Fragments – [Musique Intemporelle edition from 1995] Agitation Free are one of Germany's finest space rock groups, an outfit that launched the careers of many respected musicians like Michael Hoenig, Lutz...  (1996) » Read more

Causa Sui - Free Ride – The strummy acoustic riff and rough-cut harmonies on the title track give few clues as to what lies beyond the second index on this Danish band’s sophomore release. With “Lotus,”...  (2008) » Read more

Various Artists - Tokyo Symphonic Syndrome – Japanese progressive compilations are always an interesting listen, and this one's no exception — a collection of groups that never made an album but performed live in Tokyo in what sounds like the...  (1994) » Read more