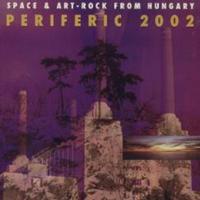 There is a wonderful variety of material on this, the second of such compilations that Periferic has released spotlighting the prog world in Hungary. The CD gets off to a promising start with a pair of bands— D Sound, and You And I— who do very convincing imitations of Eloy/Floyd space rock, and Yes-circa-1976, respectively. After Crying, who seem to be the most popular Hungarian prog band since Solaris, finish things off with their well known brand of symphonic sounds. In between are six more bands. Colorstar and Korai Öröm cover the more modernized hip end of the spectrum with their slightly technofied styles that also reach back into psychedelia, the latter being similar to Ozric Tentacles. After All goes for the jugular in a Dream Theater-meets-90s-Crimson grungy track that sounds like it was written in California. Mini and Toth Bagi Band play more by the rules but still satisfy artistically speaking. The former presents a jam-heavy instrumental; the latter a vocal song in a blend of reggae/pop/jazz/etc. I’ll save the best two for last. Kada are simply awe-inspiring, in a loose improvisational mode that exudes nothing but taste, class and elegance, only subtly hinting along the way at where their path leads. And Mindflower was a big surprise. Their instrumental offering features intimate interplay between guitar, bass, and drums, whose crack dynamic ensemble virtue bespeaks a band that has been performing together for years. There is something for everyone on this CD and all of it is worthy of attention.