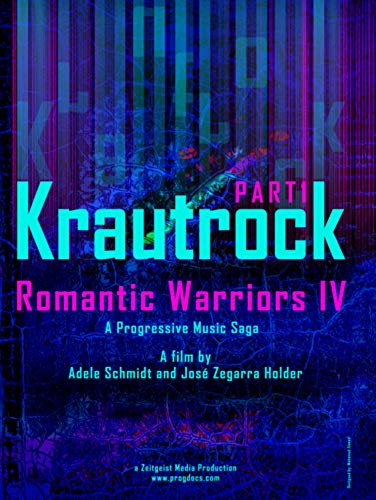 This is the fourth in a series of excellent documentaries produced by José Zegarra Holder and Adele Schmidt, and judging by the title, it probably won’t be the last. I checked my video shelf and I have the first and the third (the latter focusing on “Canterbury” bands) in the series, seems I missed the second, but I ill rectify that very soon. Part four, like all the previous editions, focuses on one area of what we commonly understand to be progressive rock; this time out it’s Krautrock and this is just part one, so the good news is there will be (at least) a part two and possibly more. I learned from an interview with John Weinzierl (Amon Düül II) years ago that to Germans, “Krautrock” is kind of an offensive term, something that we in English speaking countries came up with to describe in general post-war rock music from primarily West Germany, but in fact it’s only meant to be sort of a catch-all term for a number of different styles and sounds that really only have one thing in common (besides being German): they are truly revolutionary and don’t sound anything at all like the typical British and American rock music of their time. So that’s where Romantic Warriors IV begins, with bands from the Düsseldorf and Cologne region featured.

The film begins with a lengthy section on the group Can, and features interview clips and some excellent footage and stills of the band in their earliest days with all the original band members including singer Malcolm Mooney, who together with Irmin Schmidt shed plenty of light on the band’s formation and earliest days. Mooney’s departure is covered as well as the recruitment of new singer Damo Suzuki, and follows the band through their classic period (Tago Mago through the mid-70s) as well as the later 70s when ex-Traffic guys Rosko Gee and the late Reebop Kwaku Baah joined the lineup, through the band’s eventual dissolution; an additional segment focusing on Damo Suzuki’s Network finishes that first lengthy but very worthwhile segment.

Another section focuses on the origins of Kraftwerk, from the forerunner band Spirit of Sound, the split of the original Kraftwerk between the first and second LPs, and subsequent successes with albums like Autobahn and Radio Activity, most taken from an excellent interview with Wolfgang Flür, who explains why, as their music became more and more programmed, he felt he had no purpose within the group, and split follwing The Man Machine. Also covered are early members Andreas Hohmann and the late Klaus Dinger, the latter of course who split to form Neu! with Michael Rother. Neu!’s career is well documented with clips and stills, and Rother’s parallel group Harmonia with Hans-Joachim Roedelius and Dieter Moebius gets mention, as well as Dinger’s post-Neu! band La Düsseldorf, and its eventual conclusion in Japan as Japandorf, prior to Dinger’s death in 2008, and the remainder of the band finishing up their only album without him. And of course the thread that ties all these bands together is the late Conny Plank, who is survived by his son who is interviewed here.

A third major section focuses on the band Faust, including interviews and footage with the original band, explaining the chance that major label Polydor took signing them for two albums, and then Virgin signing them for the next two albums, as well as how their collaboration with Tony Conrad for Outside the Dream Syndicate came about, a very interesting story. From there forward is discussion of their on again, off again career from the 80s onward, including the many band permutations, concluding with a great section covering the faUSt US tour. Also there is coverage of the American band Wume (which this writer had never even heard of before), who are inspired by Faust and other bands covered herein. Throughout the video, bits of an interview with the members of Floh de Cologne keep popping up here and there, as well as some brief discussion of the 90s band (to present) Electric Orange. This is a long film, about two hours and ten minutes total, so have a good supply of popcorn ready, you are bound to see many clips and interviews that have never been seen before!

The latest installment of the Romantic Warriors series takes us to Germany, a country with such a rich and varied history that it will require three full-length films to cover. As we’ve learned from all of the reissues on the Garden of Delights label, not all rock from Germany can properly be called “Krautrock,” and we’ll set aside any speculation about whether the term is actually pejorative, since it’s right there on the label, and is used by the musicians interviewed in the documentary. The defining quality of Krautrock, as stated near the beginning of this film, is that it was made by musicians in Germany who wanted to create music that was not derivative of the popular rock coming out of England and the United States. Part 1 starts us off in Cologne, Düsseldorf, and Hamburg, diving into the histories of Can, Kraftwerk, Neu!, Floh de Cologne, and Faust along with their variations and offshoots. The American band Wume, which was largely inspired by some of these bands, is also touched upon.

Many of the surviving members of the bands are interviewed, including Irmin Schmidt and Jaki Liebezeit from Can, along with both Malcolm Mooney and Damo Suzuki. The filmmakers caught up with Suzuki in Peru, where we see him with his Network project, in which he works with different musicians in the cities he visits. The inclusion of Mooney in particular is a treat, since his post-Can work has been infrequent and not very high-profile. Of all the bands profiled, Floh de Cologne is the one I’m least familiar with, and two of the members talk about how the band started more as an art project than a musical one — they were actors playing the parts of musicians more than actual musicians. From the clips included, I’d say they’re selling themselves a little short, since they were not at all incompetent, though it’s fair to say they weren’t on the same level as the other bands covered.

Next up is Kraftwerk, with a particular focus on the band’s origins and early days, as told by Wolfgang Flür, Michael Rother, and Eberhard Kranemann. Flür’s interview is particularly fascinating, covering his invention of an electronic percussion rig when the band started moving away from the standard drum kit as well as the later time when the band decided to go for programmed rhythm parts and he was no longer needed. Rother and Kranemann were only in the band briefly, along with the late Klaus Dinger, and the story leads naturally into the formation of Neu! by Rother and Dinger upon leaving. Discussions of Neu! lead directly into Dinger’s band La Dusseldorf, as told by bandmate Hans Lampe, with the group’s disagreements and legal conflicts barely touched upon. There is also time devoted to Dinger’s final project, Japandorf, and his collaborators there. As the other half of Neu!, Rother talks about his work with Cluster as Harmonia.

The final major section of the film moves to Faust, with appearances by Zappi Diermaier and Jean-Hervé Péron. They talk about their adventures with record labels, some of the editing and remixing techniques they devised, and how the spirit of the band continues with the faUSt tours in the US. Finally, there’s a short segment about Wume, an American band I’d never heard of. At various places through the film, Bureau B label head Gunther Buskies offers perspective on the music’s enduring influence, and Stephan Plank, son of legendary producer Connie Plank, shares some memories of the early days.

In all, it’s a great peek into an incredibly fertile scene that is still relevant today, and was arguably more innovative than most of what is now labeled “progressive rock.” The filmmakers have come along at the right time to gather footage while some of the musicians are still with us. I’m definitely looking forward to the next two parts!

Nels Cline - New Monastery: A View into the Music of Andrew Hill – Nels Cline’s affinity for pummeling sound boundaries as well as working within jam bands and standard song structures (e.g. – Wilco) is now further realized within the works of another...  (2008) » Read more

The Walkabouts - Ended up a Stranger – I first encountered the Walkabouts in 1984 when they put out their debut EP on their own Necessity Records. I was struck with their unique interpretation of American folk rock, and really enjoyed the...  (2003) » Read more

Various Artists - Czech Masters of Rock Guitar / Čeští Mistři Rockové Kytary – As the title implies, what we have here are eleven tracks of smoking hot instrumental guitar rock. The list of featured performers reads like a who's who of Czech guitarists — some familiar...  (1997) » Read more