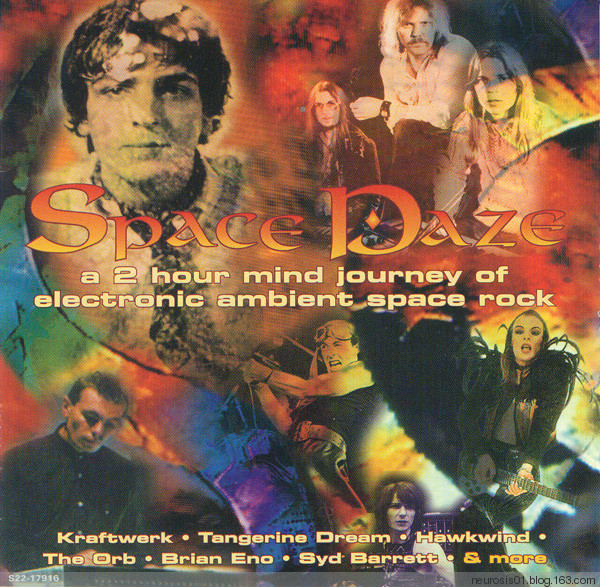 This is the compilation/companion to the Cleopatra book of the same name. In my opinion, this (and the music herein) speaks for Space Rock a lot more effectively than the book, as when it comes to music, descriptions can be hard to come by with such a nebulous genre. Suffice it to say that regardless of the different genres represented here, all of the music is definitely cosmic and spacey whether its cold and industrial, rocking and energetic, ethnic and spiritual, or synth-swamped and spiraling. I'm not too fond of the more punky/thrashy industrial side, and while the tracks in this style are appropriate here as representatives of their genres, tracks by Alien Sex Fiend, Clock DVA, and to a lesser extent Din are not at all to my tastes. Also in the same vein but more palatable to my ears are tracks by Psychic TV ("A Star Too Far") and Coil ("Nasa Arab"), both more spacey than expected. Cleopatra's "Hawkwind" axis (Pressurehed, Helios Creed, Nik Turner) gets five tracks, all of them in the vein of the Hawkwind track here "Adjust Me," quasi-industrial space rock for the most part except for Spiral Realm's "Elements" which is a wonderful ambient space out. Also ambient but certainly techno/modern are outfits like Delerium (excellent spacey ambient,) Sky Cries Mary (space outfit from Seattle with female vocals), Legendary Pink Dots (great track here, very far out), and representing techno/rave/whatever, the Orb and a short "Blue Room." Ozric Tentacles are represented by "Sploosh" (in my opinion the beginning of their slip into redundancy) one of their more poppy/rave tracks. The rest of the tracks are 70s groups, although the choice for Kraftwerk, "Spacelab," is more in the vein of their later music. Germany in general is as overlooked here as in the book, with no inclusion by Ash Ra Tempel, Guru Guru, or Klaus Schulze (although licensing could have had something to do with this.) Amon Düül II's selection is a good track ("Wie Der Winde...") but not as spacey or classic as anything from 1969-71. The Tangerine Dream track was intelligent, Phaedra’s "Movements of a Visionary," a definitive classic. Brian Eno's "Here Come the Warm Jets" and Syd Barrett's "Lanky" are typically whimsical (the latter a seeming compromise for Pink Floyd). My favorite track on the whole set, Gong's "To the Other Side of the Sky," is the compilation's brightest moment, although from Angel's Egg it's more typical of the album You, which is unfairly bashed in the book. Overall, this is a well put together compilation, especially considering the licensing aspects, and is recommended for those who want to get their feet wet in this exciting genre.

Richard Pinhas - Rhizosphere / Live, Paris 1982 – At last, a reissue of Pinhas' first and certainly most purely electronic album recorded under his own name. It also marks a time when this was the distinction between Pinhas' solo material and...  (1994) » Read more