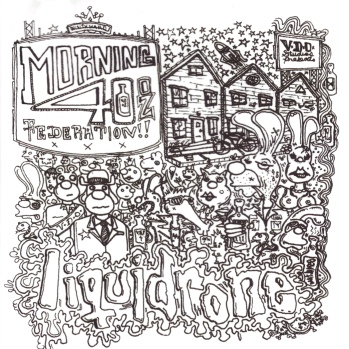 A sampler from the same label that gives you Vas Deferens Organization and others, this CD however features none of those names that I previously associated with Tekito. So in a way (from my point of view anyway) the release comes across as an all-the-rest effort. Four different names jump on board here: Liquidrone, Morning 40 Federation, Diamond Dave, and Paris. No member names or instrumentation are listed (to protect the innocent parties?). Liquidrone gives you some very goofball rock tunes that encompass waltzes and even Mowtown, while Morning 40 specializes in warped Texan psychedelia – touching upon some bluesy rock and bluegrass as well – which has little appeal for me. But hey, you can't say it isn't original! Diamond Dave takes the idea even further into drugged-out space country music, and Paris sweeps up with a low-key ballad. There is nary a straight-faced moment on the entire CD. And almost everything is delivered with that particular twang (absent from the VDO music) that reveals its Texan/Louisianan origin. Whether they are ridiculing it or merely resigning themselves to the inability of escaping its grasp one can hardly tell. But none of it grasps the kind of appeal to Exposé's core audience that Tone Float (and to a lesser degree, VDO) does.