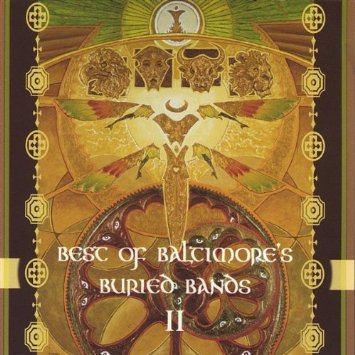 This two CD set was produced by OHO main-mover and elder statesman of the Baltimore progressive scene Jay Graboski. Apparently there must have been a “Part I” (maybe an LP?) and this is of course Part 2 – basically a non-chronological collection of demos and unreleased cuts by 18 or so bands from Baltimore from as early as 1972 through the present, each with meticulous lineup documentation. I’ll bet almost every major metropolitan area in the USA could assemble a collection like this, filled with great bands that for whatever reason never met with enough success to get them beyond the demo tape stage.

Disc one begins. After a brief electronic montage piece by duo Wild Mouse (from ’95), we hit one of the disc’s high points; a four song set by Outrageous, a 5-piece plus guests that existed from ’74 to ’76. At their best (as on the seven-minute “Faggy Goats”) their sound is a bizarre and humor-filled stew of styles, full of unpredictable twists and turns, with influences ranging from Zappa to Teapot era Gong to The Bonzo Dog Band and beyond, but all the humor certainly doesn’t get in the way of some great playing, there are some seriously good chops at work here. Onward. Next up is Oho, who have a total of eight tracks scattered around the two discs – fair enough, their man produced the set, and most of the material is from their best period from 74 through 76 (Okinawa and Vitamin Oho, neither which have ever seen a CD release.) The first set is four tracks (actually a 25 second intro from Okinawa and three normal length previously unreleased pieces) of their patented period sound, straddling the fence between late psychedelia and 70s art-rock, with experimental fun at every turn. Next up are four tracks from 1975 by the more conventional sounding Elf Park (at least by comparison to what has been presented previously), a six-piece with two guest players on loan from Oho, who seem to be influenced by everything from British prog-rock to 60s R&B to the harmony style of early Styx. “Queen of Ice” is the highlight of their set, where the influences are less clearly identifiable and they beef up the vocal harmonies with an excellent female backup singer. The remainder of disc one is one-offs by a number of different bands, including Trance Figures, Grok, Richard Lake, and Steakhouse – the latter from as recently as 2002 (not buried all that long I guess!), a four-piece of vocals, bass, drums, acoustic and electric guitars; featuring Graboski’s son Matt, they sport a decidedly fresh, modern song-based approach, and all the players are featured on Matt Graboski’s solo disc Drag of the Mask. Side one concludes with a current band, Blammo, with their David Surkamp-esque singer, and the lighthearted “You Never Should Have Sold Your Mellotron.” Well, I’ve already almost doubled my allowable word count, and I haven’t even started disc two – this review will surely get cut, but what the hell, let’s keep going; there is some great stuff on the second disc too.

And as disc one ended, so begins disc two, with Blammo’s “I’m a Frog Man,” more goofy musical humor in what appears now to be a Baltimore tradition. The two songs by five-piece Neige, who date from 79-80, are among the most interesting on the entire set, with a definite nod to the more aggressive Crimson, Present, and what might now be called Cuneiform school on one hand, and a more fluid symphonic sound on the other (but note that it’s all done with guitars, violin, and winds, the band has no keyboards). Next up are three cuts by St. Joseph’s Ass, dating from the mid-90s, which could probably be best described as art-punk with an attitude. I’ve heard many bands mining this same territory in the Bay Area over the last fifteen-or-so years, and these guys seem to be doing a respectable job with it also. Oho appears again for two tracks – this time the early 90s version, with Sue Ellen Sacco on vocals, and a definite folky influence that wasn’t present on their earlier material, with flutes, violin, acoustic guitars, and 12 string. “Burning Grey” recalls the Seattle based band The Other Side, and again is one of the better songs on the entire set. What comes next is one song each by a chronological series of three bands featuring keyboardist Bob Tiefenworth and guitarist Paul Rieger, beginning in ‘77. The first piece, “L.S.E. (Bob’s Funky Tune)” by Klangfarb almost sounds like a minute and a half’s worth of tapework, in the style of late 70s Residents, but without the vocal weirdness. Klangfarb with some personnel changes became the Liesure Suited Executives by 1980. “In the Village” is a ten-minute piece composed of busy loops, drifting ambient washes, and taped voices, again looped, repeated and often processed beyond recognition. After about seven minutes they finally launch into something that could be called “rock,” although heavily processed, again recalling the Residents. By 1984, Tiefenworth and Rieger were part of a fairly conventional sounding pop-psych outfit called The United States of Existence, with a sound that would have been right at home about 17 years earlier amid the psychedelic candy-pop of the late 60s. The remainder of disc two contains some tracks by Matt Grabowski, The Concertgebrew Orchestra, the art-punk oriented Oho spinoff Food for Worms, and Vulgarians; closing the disc are two short tracks from classic period Oho, including one from Vitamin Oho. In all, this set is a treat for the curiosity seekers among us. We all know the bands who made it; this set spotlights those that didn’t, and along the way unearths some real gems.