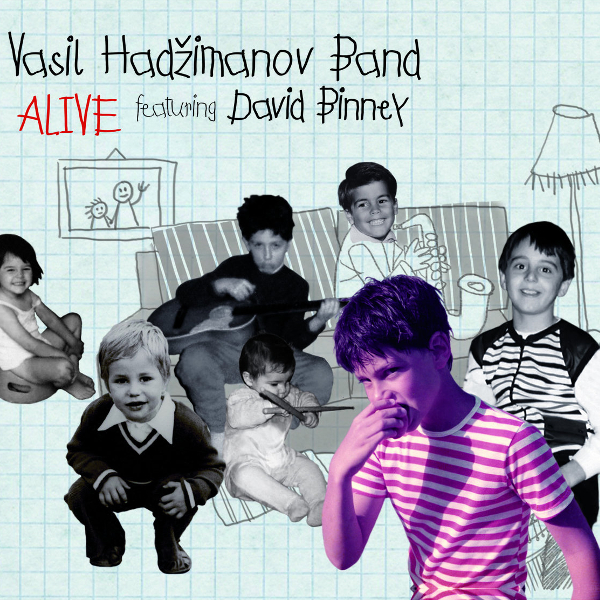 Serbian keyboardist Vasil Hadžimanov and his band have been a going concern since the mid-90s, releasing a total of six albums since 2001’s Razlooga Za…, and although membership has changed over the years, the lineup on Alive is largely the same as the band’s previous 2013 release Can You Dig It? On every release the band features anywhere from one to numerous (as was the case on 2009’s Života Mi) guest players, giving each a different sound and approach, and this time out the guest player in the spotlight is American saxophonist David Binney, who plays on six of the eight pieces here, with a couple dozen other recordings to his credit. Now normally a live album would be a recap or best of previously released studio recordings played in a live setting, but that’s certainly not the case here – every one of the pieces on this 72 minute release, recorded live in five different venues on the band’s Serbian tour of October 2014, is a composition unique to this release; three pieces are band compositions, two by Hadžimanov, and the remaining three by other band members. Their style on most of this disc hovers somewhere between the worlds of jazz and progressive rock, often informed by ethnic fusion and even classical stylings. Whenever Binney fires it up on alto sax, we are clearly speaking a powerful jazz idiom, but often in the more subtle moments (as on “Uaiya”) one might occasionally be reminded of Lyle Mays-era Pat Metheny, or progressive rock’s jazzier side. The band-written piece “Zulu” first lays out a smoking and pervasive rhythmic deployment by percussionist Bojan Ivković and drummer Pedja Milutinović, the former adding some spoken effected vocals after the piece settles down, later followed by some magical sax soloing by Binney, and some hyperbolic piano riffing. There are occasional effected vocals on other pieces as well, but primarily this is an instrumental outing. We are in fusion territory with “Dolazim,” an interesting tune penned by guitarist Branko Trijić, which might sometimes recall the work of John McLaughlin’s Mahavishnu Orchestra or even Larry Coryell in a more relaxed setting. Throughout this set one will find some amazingly tight interplay by every member of the band, and stellar virtuosic playing at every turn, with Hadžimanov’s keyboards leading the charge.

The Tractor's Revenge - Othello – Tractor’s Revenge is a four piece act which embraces the darker side of gothic progressive rock much in the vein of Belgium’s Universe Zero. Led by Avi Bellili, the twelve pieces on this recording...  (2005) » Read more