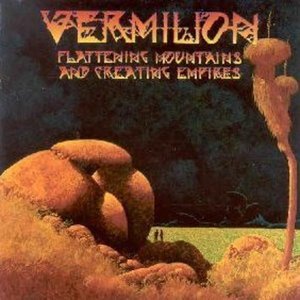 This album is quite an oddity, coming as it does from a little-known (so far) band on an independent label, for it features a big name producer (Steve Albini) and a big name artist on the cover (Roger Dean). Stylistically, it makes me think of a sort of alternate-universe King Crimson who took a different turn after Starless and Bible Black: what if, instead of whittling down to a solely guitar-based band and working towards heavier sounds, they had kept the instrumental variety of the earlier days and got louder? At their most aggressive, Vermilion (yes, that's how they spell it) have all the dissonant, angular crunch of late-90s Crimson, but those passages are offset by quieter moments featuring piano, violin, and trumpet. This band also lacks the sometimes mechanical technical relentlessness of Crimson, presenting a flowing natural style more based on emotional drive than on technical virtuosity. Not that these guys can't play. Their chops are admirably up to the challenging arrangements on the four instrumental tracks that make up the CD. The production is very crisp and live sounding, even though numerous overdubs must have been required. Vermilion are one of the best of the new generation of bands merging the indie-rock sensibilities of the 90s with the prog-rock complexity of the 70s.

Jackhammer Trio - Sonarchy and Synergy – Seattle’s answer to the NY Downtown jazz scene is part fusion and jamming entourage, but also a tight trio too. Rik Wright is the guitarist in these ten work-outs, and his style reminds me of...  (2003) » Read more