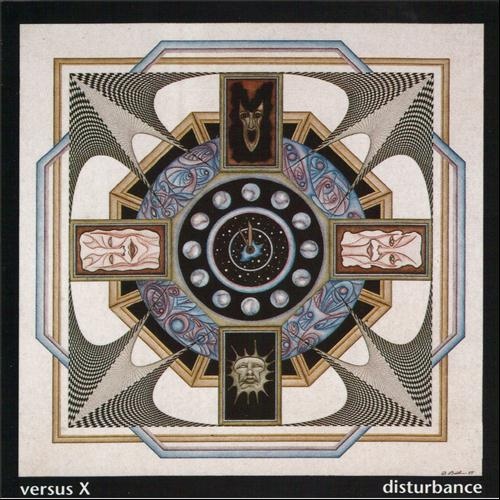 Versus X is German guitarist Arne Schafer's band. Schafer was known for his solo album, The Border of Awareness, on Musea in which he delivered a thoughtful music maybe a bit in the range of Peter Hammill but with real good, well rendered instrumental explorations. In fact, what made that album amazing is the fact that it didn't sound at all like a one-man work. On the other hand, Versus X's Disturbance has a tendency of sounding a bit close on itself, in a way. As if the band (with Ekkehard Nahm on keys, Stephan Dilley on bass, and Stefan Maywald on drums) were playing for themselves. This gives a music that is less open but still uses the long explorations that gave Shafer's solo album an outstanding quality. There are three pieces on Disturbance, the shortest running time being 16:47. As such, it would be unfair to focus on short fragments leaving the overall musical meaning aside. The pieces are thoughtfully developed, with their share of intricate rhythms and musician interplay, mostly in the rock domain of prog. The developments, although well-thought, are a bit on the heavy side regarding the atmosphere proposed here. This is to say that the listener must participate more and really get into the music for it to unveil its subtleties in time. Technically the musicianship is excellent and one can easily appreciate the working of these musicians towards the goal of bringing to life such explorations. Largely instrumental, Schafer's voice, when present, gives the right lead to the music with philosophical poetry sung in English.