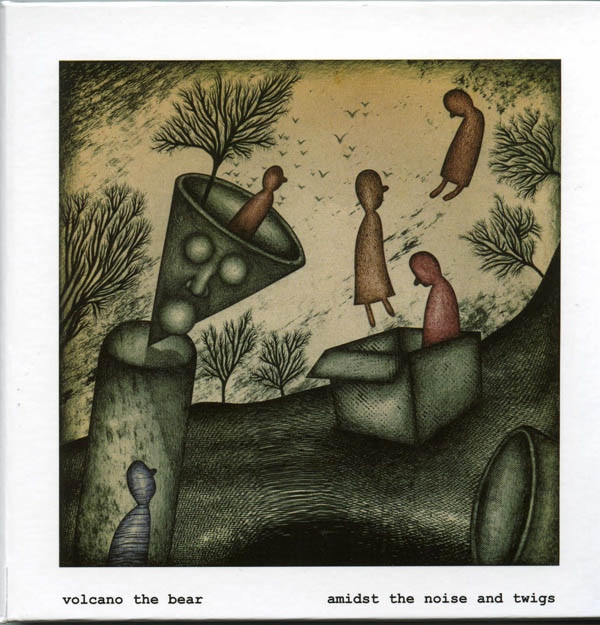 In #34, I likened Volcano the Bear’s previous outing, Classic Erasmus Fusion, to the stranger parts of Ummagumma, and to a certain extent that comparison is still valid. There is an increased emphasis on song-like structures, though you can still find the stretches of odd noisemaking that have been the band’s modus operandi since I first heard them. And notice that I said “song-like structures” and not “song structures” – we’re still wandering out in the hinterlands of composition, where a verse can wander for hours without meeting a chorus and there is no bridge in sight. Some of the CD comes off as a really psyched up example of psych-folk, like the lost tapes Comus might have recorded if they had collaborated with Syd Barrett after eating a batch of Psilocybe mexicana, recovered by the Residents and manipulated almost beyond recognition. Which is to say it’s the most listenable VtB yet, full of interesting sounds juxtaposed and twisted, sometimes recognizably produced by conventional instruments, sometimes unidentifiable. There are also hints of the flavors of Middle Eastern and Balkan folk music plus some free jazz to round out the distinctive stew. The lovely (if uninformative) packaging consists of a bi-fold cardboard cover with four beautiful, vaguely disturbing surrealistic paintings; there is no booklet and no listings for credits at all, even for the graphic artist.