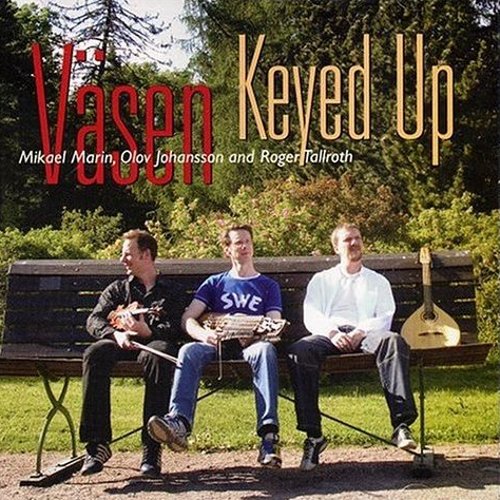 After many years as a quartet, Väsen returned to their original trio configuration for last year’s Trio (previously reviewed). And they apparently liked it so much they decided to do another recording without percussion. These fifteen tunes were recorded live in the studio with only a few takes each, and there’s a great mix of arrangement and spontaneity that really shines through. Just as Scottish and Irish musicians rely on jigs and reels for their instrumental tunes (dances really), Swedes seem to base everything on the polska. I must admit that for a bunch of tunes supposedly built in the same form, there is an astonishing amount of variety, from quiet and meditative to hyperactive things seemingly impossible for dancers. All three musicians contribute compositions, but you’d have to be a more discerning listener than I to tell the difference without reading the credits. The interplay between Mikael Marin’s violin or viola and Olov Johansson’s nyckelharpa provides most of the delights, skipping lightly on bouncy melodies, sometimes in unison, sometimes breaking into harmonies. Roger Tallroth’s guitar is cast mostly in supporting roles, though in the way of great folk guitarists, he can make the backing as interesting as many players’ leads. Sad to say, this is merely another solid entry in Väsen’s catalog, but not a bad place to start if you’re interested in Swedish folk.

Mastermind - III - Tragic Symphony – Ever wonder what happened to progressive rock? Especially the rock part? Wonder no more. Mastermind has returned with a third album that is every bit as potent as one might expect after the heavy...  (1995) » Read more