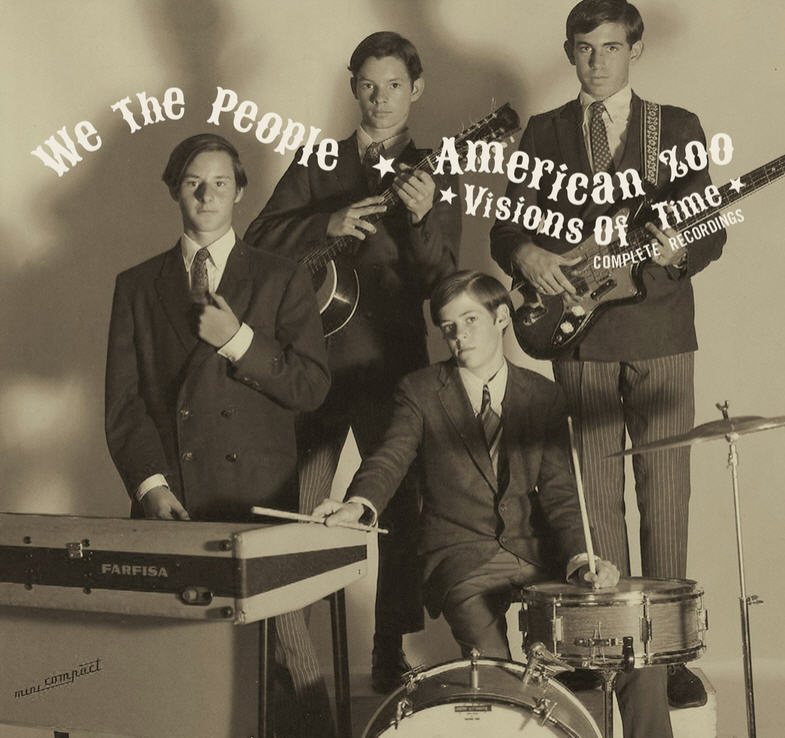 Meet four teenagers from the mid-60s whose perseverance paid off, though all in due time. When the group We the People released their debut single “Feelings of My Emptiness” b/w “For No One to See” in 1967, three of the members – guitarist Bill Bottrell, keyboard player Dave Danieli, and bassist Bill Hawkins, were 15-year-old high school students from the Los Angeles suburb of La Crescenta. When original drummer Steve Zallian decided to leave the band, Bottrell’s neighbor Jason Martz, a year younger than the others was ready to join the group as their drummer. The disc at hand presents all of the band’s singles (A and B sides of two singles recorded as We the People, and two more single A’s and B’s after they were forced to change their name to American Zoo in 1968 due to another band operating as We the People) plus an early two-song acetate that represents the band’s first ever recordings. The songs presented here are all band originals, mostly written by various combinations of band members. Their strongest influences are the West Coast folk-rock sounds typified by bands like the mid-60s Byrds, early Beau Brummels, and the earliest Jefferson Airplane – and to a lesser extent Help! era Beatles and Between the Buttons era Stones. They were fairly adventurous with their arrangements, preferring acoustic guitar over electric on many of the tunes, and including banjo and mandolin on some, with Hawkins handling most of the lead vocals, and the others providing a rich bed of harmony vocals. By 1969 the band had drifted apart and new projects were started. Over the ensuing years, Bottrell became a recording engineer and producer working with artists like Michael Jackson, George Harrison, Jeff Lynne and ELO, Sheryl Crow, and Tom Petty, to name but a few. Jason Martz became Jasun Martz, touring with Zappa as Eddie Jobson’s keyboard tech, later contributing vocals and drums to his Live in New York album; he worked with Michael Jackson on many of his best known recordings, and also released his own avant-garde symphony The Pillory, plus several other excellent recordings following that. Original drummer Steve Zallian went on to work as a director, producer, and sceenwriter in the film industry, including Schindler’s List. Hawkins also went on to a brief career in music, but never hit the big time, and sadly Dave Danieli passed away at a relatively early age. Visions of Time brings together all of the band’s recordings, a little less than half an hour’s worth of music, which up to this point has only been known to serious record collectors. Now it’s here on CD for all to enjoy.