Weaving a String of Dreams —
The Hoelderlin Story

Hoelderlin are not generally mentioned in the same breath as Grobschnitt, SFF, Novalis, Wallenstein, and the other leading lights of German symphonic rock, but they should be. Their brand of progressive music, while distinctly German, was unlike any of their aforementioned peers. Hoelderlin's style is altogether mellower and more pastoral, drawing influence from rock, jazz, folk and the music of the Romantic era. The result is a lyrical, melodic music distinct from anything else happening in Germany. Perhaps this is why the recent reissues have not received the attention they deserved thus far. 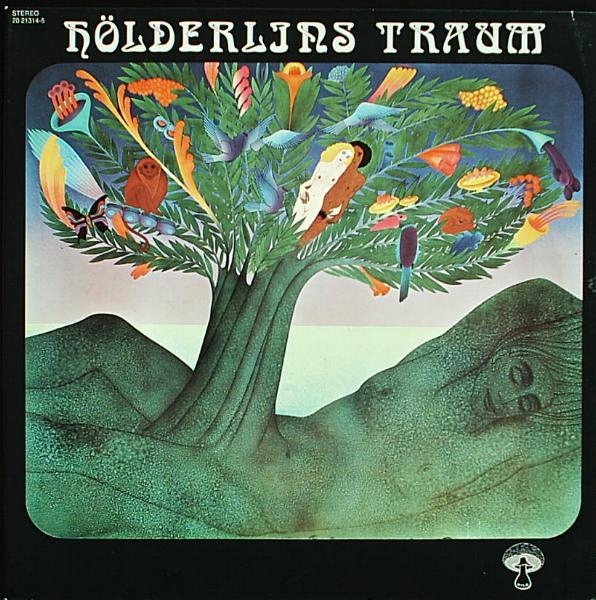 Hölderlin was formed in 1971 as a folk-rock group by the Grumbkow brothers, Christian (guitars) and Joachim (keyboards, cello) as well as violist Christoph "Nops" Noppeney. This line-up of the band also included Peter Kaeseberg (bass), Michael Bruchmann (drums) and Nanny DeRuig (vocals). Three months after the band's genesis, Rolf-Ulrich Kaiser had already approached them offering a contract with his Pilz label. So in January of the following year, this young band was already recording their debut album, Hölderlins Traum (Tempel/Spalax 14297, CD) ("Hölderlin's Dream," like Novalis, the band takes its name from a poet, Friedrich Hölderlin). This was not Hoelderlin as we would come to know them, rather, it's symphonic folk music with female vocals singing German lyrics. Acoustic guitars blend with strings, woodwinds and the almighty Mellotron, arriving at an idyllic fusion of folk and classical with DeRuig's contralto soaring over the top. There are guest appearances by Pilz stablemates Peter Bursch (Broeselmaschine) on sitar and Walter Westrupp (of Witthuser & Westrupp) on recorder.

The band felt overlooked at Pilz. As it was, they were certainly atypical of Kaiser's roster (Tangerine Dream, Guru Guru, Ash Ra Tempel), and as such, they promptly parted company, losing DeRuig in the process. They would not be so lucky a second time, it would be two years before another record label would sign them. Kaeseberg's brother Joachim joined as a second guitarist during this period. 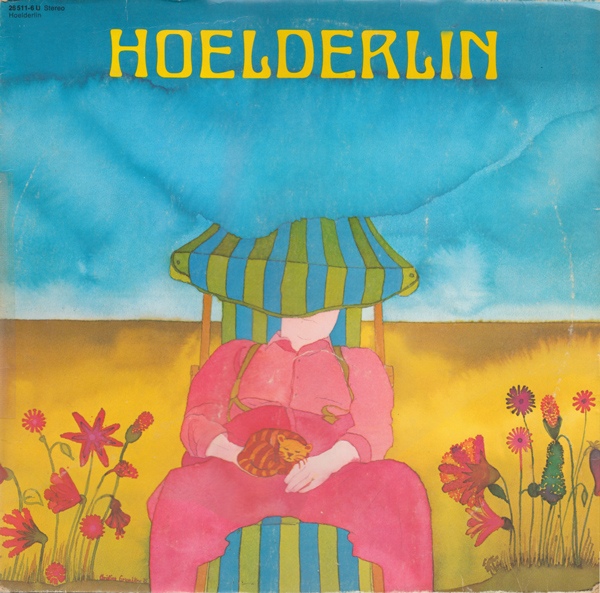 At last in 1974, Intercord records signed the band to their Spiegelei subsidiary. This relationship would be a much more fruitful one, producing five albums in the next five years or so. In early 1975, they entered Conny Planck's fabled studio in Neunkirchen to record their eponymous LP Hoelderlin (WMMS 041, CD). With this album, the emphasis was shifted to Noppeney's viola. From the opening track, the instrumental "Schwebebahn" spotlighting Mellotron and seesaw viola, one realizes that the band has found renewed purpose. The folk of the first album is muted somewhat, replaced by Romantic interludes, jazzy soloing and surges of rock power. The English lyrics celebrate minutiae and the simple pleasures of life, quite a change from the obtuse, cosmic, rarefied lyrical themes of bands like Eloy. The effect reminds one a bit of Caravan, but has more in common culturally with Germany than with the Canterbury scene. The centerpiece of the album: the 17-minute "Death-Watch Beetle," which includes a synth-distorted viola solo. More guest appearances by Zeus B. Held of Birth Control and Norbert Jacobson of RMO. A powerful album, and one that would set the style for future releases. 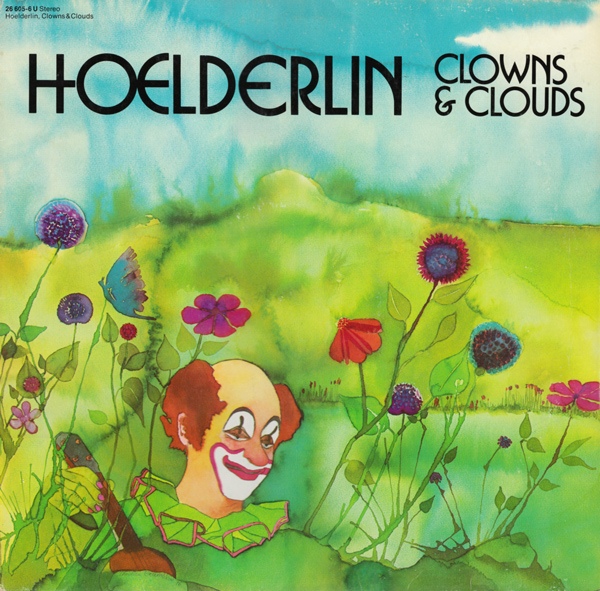 1976's Clowns & Clouds (WMMS 043, CD) returned more of the orchestral instruments (cello, flute) to the fold. The Kasebergs left (actually, Joachim stayed on as the band's live sound-mixer), then Hans Baar took up bass chores. For Clowns & Clouds, the band adds a conceptual component for the first time. The record was broken up into The Clown Side and The Cloud Side. The Clown Side consists of airy, primarily vocal pieces with sprightly melodies, similar in style to "I Love My Dog" from the first album. The classic "Circus" is contained herein, a lengthy track containing some of the band's finest guitar and viola solos. The Cloud side is mostly instrumental, consisting of just two long tracks: "Streaming" and "Phasing." The sound here is more dreamy and impressionistic, in which the rock instrumentation mixes with the classical, creating a chamber music feel. "Streaming," for example, opens with a gentle vocal section with acoustic guitar and flute the dominant instruments, leading into a long, swirling instrumental passage based around a hypnotic 6/4 rhythm over which guitar, viola and soprano sax solo. Possibly Hoelderlin's best album, with a solid collection of tracks, the classic line-up featuring Noppeney, Baar and both Grumbkows and powerful performances by all. This is the recommended starter album. 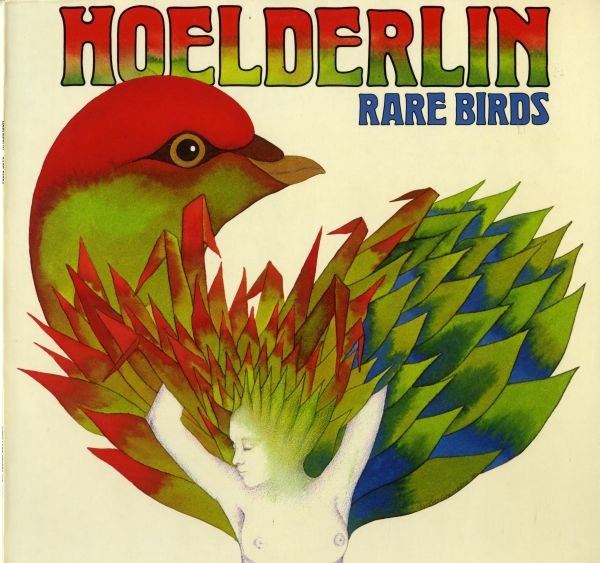 Spanish-born Pablo Weeber, who had played briefly with Guru Guru, made his debut playing guitar on the 1977 album, Rare Birds (WMMS 045, CD). Despite writing all the lyrics, Christian Grumbkow was no longer musically involved with the band, but remained on as the group's tour manager / supervisor. With the exception of the stronger rock presence of Weeber on guitar, there was no great change in musical style. The band produced another classic track in "Haektik Intergalaektik" a high-spirited piece continuing in the vein of "Circus." Weeber contributed one of the albums other great compositions, the savage fusiony instrumental "Necronomicon," which featured a guest spot by ex-Message drummer Manfred von Bohr. Truly one of their best albums, well worth getting for the band's fans. 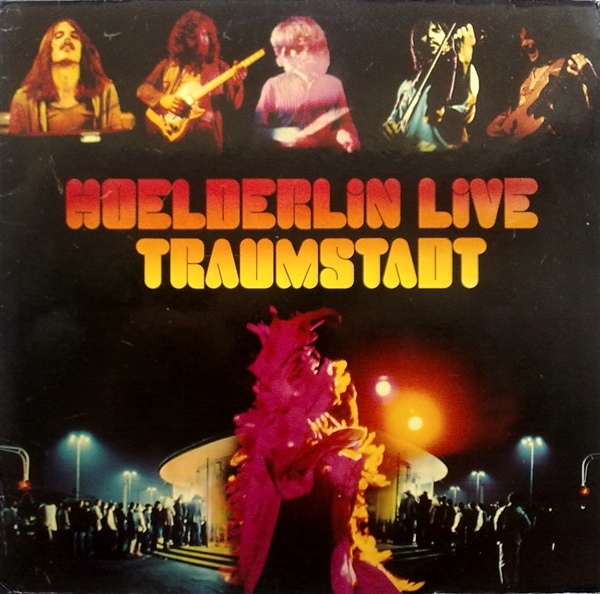 Also recorded in 1977 at the Opera House in Wuppertal, but not issued until 1978, for reasons described later, was the band's first and only live disc, the double LP Traumstadt (WMMS 047/048, 2CD) ("Dream City"). The album draws primarily from the two previous albums. Strong performances of "Schewbebahn," "Streaming" and "Phasing" notwithstanding, one can't help but be a bit disappointed that there's little variance between the versions of the songs here and their studio counterparts. But one must give them credit for replicating their intricate studio style in a live setting so well. And the album includes several tracks ("Die Stadt," "Soft Landing") unavailable on any other album, a big plus. It's worth it for the viola-driven 5/4 jam "Die Stadt" ("The City") alone.

1978 was a period fraught with difficulty for the band. Weeber left the band. Tommy L'ohr (guitars, synth) and Rudiger Elze (guitar) were added in his place. The band took on a new, studio-orientated direction, simplifying the music a great deal. Noppeney, in his wisdom, realized there was really no place for a viola-player in a pop-orientated band, so he quit. Bruchmann followed suit, his replacement being Eduard Schicke of SFF fame. It was this line-up that produced New Faces (WMMS 049, CD). 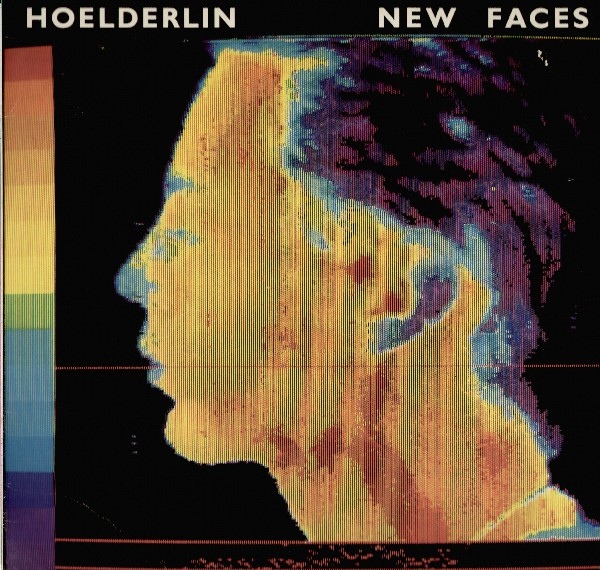 New Faces finally did appear in 1979, and can be seen as nothing but a disappointment. The new pop-orientated direction seems like a cop-out, the compositions uninspired. Still, the Camel-ish instrumentals "High in Shanghai" and "Footsteps" are rather good, "Gentle Push" likewise has some similarities to Camel. Also, "Cold Winds" and "Footsteps" have some similarities to the Hoelderlin of old. New Faces marked the end of an era for Hoelderlin. It was also their final LP for Spiegelei.

This line-up did one further album, the German-language Fata Morgana, for Polydor in 1981 before disbanding. But it's their 70s output for which Hoelderlin will be remembered. Their three classic albums are all memorable events in German prog, and deserve to be heard by all fans of the genre.

Travis Larson Band - Rate of Change - Live – This concert video commemorates The Travis Larson Band’s tenth anniversary. With four studio albums and a ton of touring under their belts they’ve made a name for themselves as purveyors of...  (2011) » Read more

X-Legged Sally - Killed by Charity – How to categorize a mix of jazz-fusion, funk, and experimental punk rock? Don't bother! Pigeonholing X-Legged Sally is like trying to convince Bob Fripp to play 12-bar blues. It probably could be...  (1994) » Read more

Aton's - Klein & Wagner – Aton's is led by vocalist / guitarist / keyboardist Pietro Ratto, who is also the sole songwriter for the band. For the most part, the compositions are more interesting rhythmically than...  (1997) » Read more