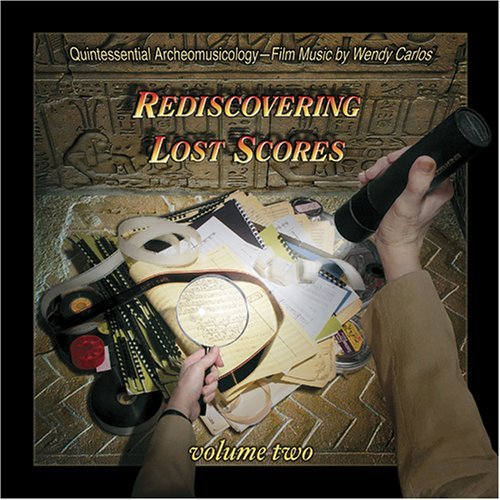 Writing about music is never really easy, but writing about music that was created for a purpose other than just listening is even harder. The pieces on these two discs were recorded as background music for films. In some cases the music was actually used for a finished product (such as the little known 1998 science fiction film called Woundings), and in others, the music (for one reason or another) never saw the light of day. Among the pieces that did get beyond the studio are works for Stanley Kubrick’s films A Clockwork Orange (1971) and The Shining (1980) as well as the groundbreaking computer fantasy Tron (1982). One thing that might surprise many familiar with the Carlos oeuvre is the presence of real orchestra both in addition to and in place of the usual electronic music. The detailed liner notes provide descriptions of how the pieces came about, and why some of them ended up being rejected. In the case of The Shining, much of the writing and recording Carlos did happened before the film was complete, just from reading the book. These big, brassy, pulsing pieces ended up not fitting the more quiet mood of the movie. Kubrick was well known for using classical music in his films, so many tracks are arrangements of old pieces, notably the “Valse Triste” of Sibelius. This makes for an interesting contrast between the melodic, melancholy pieces and the creepy, dissonant ones. Carlos fans take note: the Clockwork Orange tracks present here are not on the Complete Original Score collection. Also included are a number of short pieces recorded for UNICEF films, which feature various ethnic flavors sprinkled on some of the less bombastic material. The value of this music is clear for Carlos fans and music historians, but does it hold together as a listening experience? That’s a harder question, and my best answer is Sometimes yes, sometimes no.