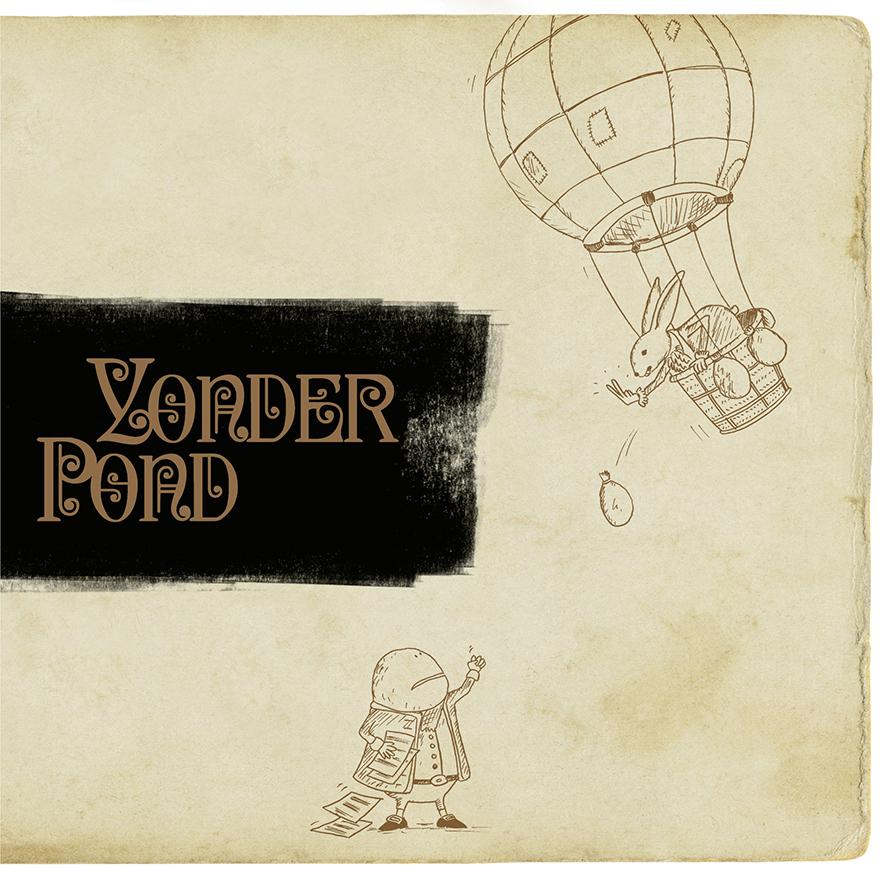 Yonder Pond is the recording project of Swiss drummer and multi-instrumentalist Rémy Sträuli, who first came to the attention of Exposé with his band Yolk back in the 2003 timeframe. In issue #29 we reviewed five of their albums. Pondering Aloud is the first recording to come out of this project, an eight-song LP plus a two-track single packaged together, and like too many others these days, there are no plans for a CD release, but the entire ten songs can be downloaded at the Yonder Pond Bandcamp site. This is almost a total solo project, though Sträuli uses three names to identify the members of the fictitious trio: Emyr Taurelis is the vocalist, formerly of the Jolly Satanists, Rembrandt van der Straal on piano and keyboards, was supposedly born at the Apple rooftop concert on January 30th, 1969 at the Paradiso in Amsterdam, and lastly, female drummer Remily Layne, formerly of beat-prog legends Blutti Moose. All three are in fact Sträuli, playing drums, percussion, keyboards, and singing. There are several real guest musicians contributing, including Stef Strittmatter handling all guitars and sitars, Pascal Grünenfelder on bass, Markus Strauss on flute, and Beat Luthi on backing vocals, track depending. The album (along with the single) presents a concept that is detailed in “the story” on the back of the LP, which is fairly simple and straightforward and not to be taken too seriously. Most of Sträuli’s songwriting influences seem to come from that magical time of the late-60s Beatles and many other psychedelic and proto-prog bands that came in their wake, most notably Syd Barrett era Pink Floyd, as well as his post-Floyd solo work, and perhaps Kevin Ayers as well, with plenty of early 70s progressive rock apparent in the arrangements throughout. Opener “Time Flies” pretty much has it all, and serves as a calling card for what is to come. One of the finest three minutes on the LP has to be “Aviary Lament” where the Barrett influence is heard clearly in the vocal refrain. The A side of the single presents the catchy and melodically colorful “Who Do They Think They Are,” but it’s the single’s B side “The Mope” that presents one of the most memorable tunes of the entire set, a true masterpiece of songcraft and arrangement, where flute and piano carry the main melody and solos, with bass and guitar adding support. Pondering Aloud is a winner, beginning to end, and will especially appeal to listeners with a sensitivity for the classic era that it seems to have come from.

Amarok - Sol de Medianoche – Over numerous releases now, Amarok has essentially created their own musical world, somewhere between the Mediterranean-Arabic folk music axis, the medieval sounds that might have been associated with...  (2008) » Read more