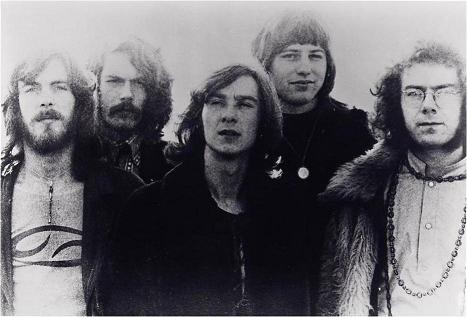 King Crimson is a rock band founded in London in 1968 by a group of musicians from western England. Widely recognized as a foundational progressive rock group, the band have incorporated diverse influences and instrumentation during their history. Guitarist Robert Fripp has been the sole constant member, and through its history, he has dissolved and reconvened the band several times with widely varying membership. The initial version of the band was an outgrowth of Giles, Giles and Fripp, a trio that had been struggling for success. The group added multi-instrumentalist Ian McDonald, and before long Peter Giles (bass) departed, leaving brother Michael Giles as the band's drummer. Greg Lake came on board for bass and lead vocals, and the first incarnation was set. After the recording of the debut album, the first personnel changes started, setting what would be a trend for future versions of the band. Giles and McDonald left, and Fripp recorded the next three albums with varying configurations. With Larks' Tongues in Aspic, the band's second classic lineup solidified, consisting of Fripp with Bill Bruford (drums) and John Wetton (bass, vocals), augmented by David Cross (violin) and Jamie Miur (percussion) at times.

Fripp disbanded the group entirely in 1974, and it wasn't until 1981 that the name King Crimson was resurrected, this time with Bruford, Adrian Belew (guitar, vocals), and Tony Levin (bass). This lineup managed three albums before the next hiatus was called.

The next Crimson formed in the 90s, featuring all four of the 80s members plus Trey Gunn (guitar) and Pat Mastelotto (drums) as a "double trio." With some variations, this configuration lasted through the 90s. The next phase of King Crimson began in 2013, with a touring group consisting of Fripp, Levin, and Mastelotto joined by Jakko Jakszyk (guitar, vocals), Gavin Harrison (drums), Bill Rieflin (drums, keyboards), and Mel Collins (saxes, flutes).

Shawn Phillips - Living Contribution: Both Sides & DVD – Shawn Phillips is a Texan guitarist with an incredible three-octave vocal range. But Shawn is not your typical Texas musician. He went to England in the mid-60s: he played sitar on Donovan’s...  (2009) » Read more

Hecenia - La Couleur du Feu – If you've ever heard Hecenia's first album, Légendes from a few years ago, with vocals, drum machines, and all, you might want to push all that out of your mind now. This new album is...  (1995) » Read more

Lunatic Soul - Lunatic Soul II – Nowhere on the cover does it actually say it, but this is indeed the second Lunatic Soul, a follow-up to the first, which was released a couple years ago. In essence, it is the solo project of...  (2011) » Read more